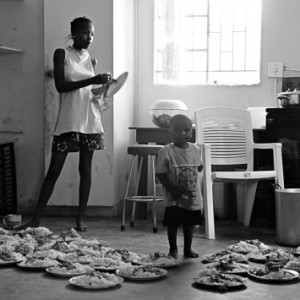 Red Baklava was born in California and raised in San Antonio. He sold his first image at the age of fifteen – an event that led him to adopt the title of the image as his own name. His work has shown in galleries and sold privately in several countries around the world. Some of his more recent work includes a private showing for “Amnesty International’s” partner organisation “Artists for Amnesty” in Los Angeles. He is the official photographer for the “Dancing4Kids” (D4K) Organisation, based in Tokyo, Japan aimed at helping children around the globe. Recently this work has taken him to Tokyo, Hong Kong and South Africa to produce images for the international festival “Foto-Septiembre” in San Antonio and he has an additional solo show in Tokyo later this year. On his trip to South Africa he visited the Two Sisters Orphanage as part of the D4K initiative. An image from this body of work is his contribution to this issue.

Red Baklava lives and works in the USA